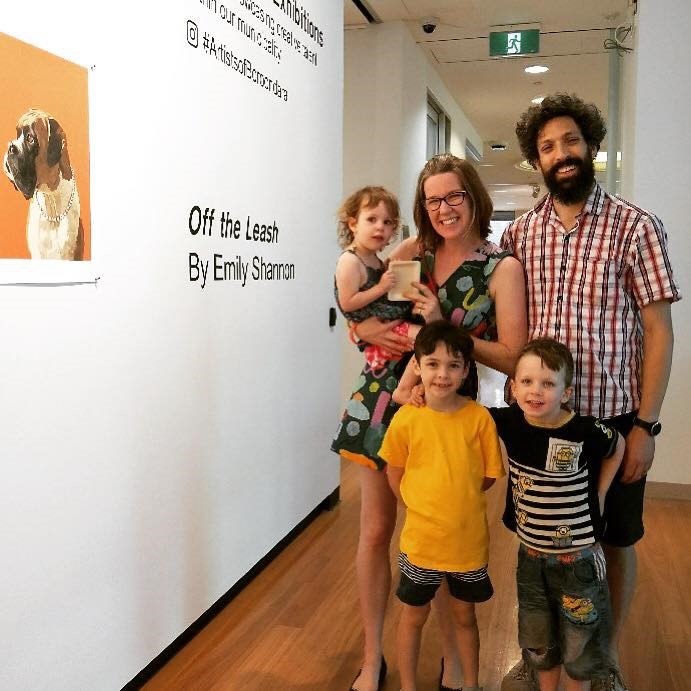 My heart is in my throat. A bead of sweat slides down my temple. I’m in my bedroom wearing ugg boots looking at the courier box on my bed. My trembling hands take a knife and start to slice. This is the moment. I gingerly fold back the cardboard doors. What if it’s not how I thought it would be?

The contents lie swaddled in soft white paper.  I lift it away. A pause. I am swamped with relief. Yes. All those late nights in front of my second computer monitor that broke my budget have been worth it.

It smells. It bends. It throws light in ways I had never conceived. I can look into the gentle textural undulations as far as my eye allows. It’s no longer just a bunch of backlit liquid crystal molecules. Yes, this is the moment:

a tangible kicking, writhing piece of art has been born.

Deep and vivid, textured and supple, ready for the world.

As a digital artist, this is the moment ‘everything’ builds up to.

So, what is that ‘everything’? The best tools (the Wacom tablet, the hardware calibrated screens, the Adobe Creative Suite).. plus, years of training in artistic and digital practices, months of learning and continual development in manipulation of technology, dozens of hours of implementation and a million tiny problems to go from initial creative conception to generation of a digital artwork.

So, you can imagine that it’s nail-bitingly scary to entrust to someone, the process of bringing my artwork to the other side of the screen! Because after all the ‘everything’ I’ve invested, it really matters to me that they get it right!

This fear of entrusting my work to a Printer began two years ago when I moved to a mainly digital art process. Before that time, I had dabbled with traditional mediums in the evenings after working through the day as a Physiotherapist.

After birthing my three masterpieces into the world (now aged 3, 6 & 8) I invested so much of my creative energy and time into these precious people. And then when my oldest started school, I took a little breath and tried resuming my art again, in the evenings.

It was hard. I was SO tired, there was less time, it was messy.

There wasn’t enough time to set up, plan, do, and then clean up so it wasn’t sabotaged by my ‘helpers’ the next morning!

So, typical of a creative, I decided it was time to expand my medium repertoire – and go digital.

Building on the little knowledge I had, I taught myself how to use the Adobe Suite in the evenings. Youtube and Google became my late-night conversation buddies!

And naturally, as my skills grew, so too did the things around me. That $80 drawing tablet badly needed an upgrade. The laptop screen was hard to see a full colour gamut on. My habit of using my dining room table as a desk needed to be kicked.

I was getting a good response on my social platforms on what I was making, so I decided for the first time to apply for a Council-run Art Prize.

I won first place and $1500 in prize money and surged with confidence!

The last year has been a whirlwind as I also held my debut solo exhibition at Hawthorn Art Gallery in January (featuring 16 digital art prints of humanised dogs), followed by multiple digital art commissions printed on both paper and canvas and was offered teaching work in digital art at a Community Centre.

I began offering an extensive selection of limited edition giclée prints on my website (bypassing the scanning and photographing of actual art)… because reproductions are a natural and easy part of this medium.

Creating art digitally has been a vital step in transforming my career in the arts. I’m now at a place in my arts practice where all I need to create a high resolution A2 print is my finger and iPad!

But still, every time I process my works to be printed that fear inside me niggles…

“What if it’s not how I thought it will be?”… but after a lengthy process of trial and error with several Print Houses, I’m happy to say that the one I’ve settled with (Creffield of course), I know that the printers won’t be happy until I am – and that actually makes me feel a whole lot better!

Em Shannon is a Melbourne based digital artist with interests also in acrylic and watercolour painting. She loves to push boundaries of mediums and experiment with fresh combinations such as watercolours and digital art.

Flowers, succulents, clouds, birds, and found treasures she encounters while walking the school run are her muse. You might also occasionally catch her sketching on her iPad in a café. Her repertoire of limited-edition prints can be found online at https://www.emshannonart.com/

There are no comments

No products in the cart.